This week, Jun finished the first design solution for the branding of Tiny.

Lena did concept design for poster and logo as well.

Jibran create a few paper prototypes with the team.

Carl worked on a digital prototype on ipad. 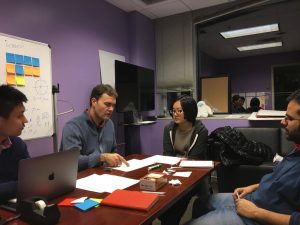 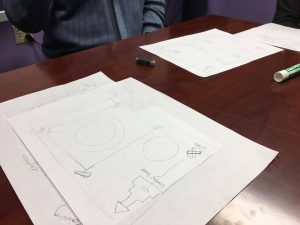 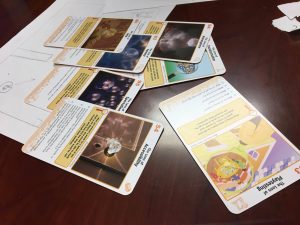 We met Jesse on Tuesday and following his advice looked at each of our main ideas using various design lenses, in particular using the lens of spectation atmosphere and fantasy and help to help us come up with art concepts for the game.Also we considered each game in terms of transformation, activity and game.

Following Jessie’s advice to better to use specialization, we refined the paper prototype, and playtested it. We also created two more paper prototypes and play tested those.

Jesse also commented that ‘spatialization’ was a good avenue to investigate for teaching angles. So considering his advice we adapted Angle Ninja. Instead of making gestures to create obtuse, acute, right angled, and straight angles to defeat a single enemy we would instead have multiple enemies which we would attack from a fixed position on the iPad.

The shift in design was due to wanting to focus on the fundamental lesson of teaching familiarity with angles rather than the more advanced one of the special properties of angles.

Using the Lens of Fantasy, and Help we brainstormed up a number of concepts for the game answering a number of fundamental questions such as:

We then applied these concepts to the three paper prototypes we had.

At this point we had three prototypes, and a number of concepts:

After some consideration we folded Spaceship Angles into Abstract Glue Circle because they essentially presented the same problem. Both prototypes boiled down to relative connect problems of selecting from a 360 degree and firing to the next node.

By the end we had two prototypes and two concepts:

We then considered each game in terms of transformation, and activity.

We decided on two general direction for further explorations on game design, one is space themed shooting game, and the other one is a farm themed tossing game.

When we met our instructors, Scott and Ricardo challenged us about what we can bring our client, students at Colonial School. They suggested that our approach needs a more refined concept: making a game simpler is indeed a more complicated process.

After some brainstorming about content, we drove away with several initial ideas.  For example, we wanted to create a game that involved with physics. However, we then realized that it would be too much information to handle for our audience. That is why we decided to change the direction: adopt the concept of angles only.

In addition to work on the next prototype, we will refine the branding materials based on the critique next week. We will also continue to work towards our next prototype goal in anticipation of 1/4 Review.